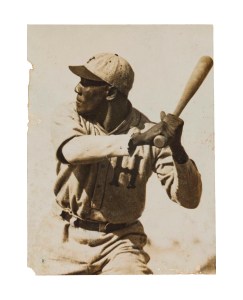 Jud Wilson: All squared up

We come to the end now of a skein of honorees whose achievements were too hard to separate from one another but who seemed to us to sit in a clump behind the Charlestons and Dihigos of the Blackball world. Because we went in alphabetical order, someone in the bunch had to come last, but that’s no slight on our fourteenth honoree. But I think he might get very angry about it anyway.

Put your hands together for Jud Wilson!

Wilson was a tank. He stood 5’8″ but weighed in at a muscular 190 pounds. He looked like he’d been built with Tinker Toys or an Erector Set. Unlike, say, Josh Gibson who had a neck and shoulders with that coat-hanger shape you see on a lot of athletic specimens, Wilson’s shoulders looked like he had football pads on: wide and as square as you could make them. His body barely tapered at all to the waist, so infielders must have felt some trepidation when he came charging into them like a running architectural column.

All this gave Wilson tremendous ability to drive the ball, which he did with great authority. Despite being a lefty, the comparisons to Edgar Martinez’s career are so obvious that they bear repeating. Both guys settled in late as regulars. The Mariners notoriously held Edgar back in deference to Jim Presley, and Wilson, for reasons to do more with the less organized talent flow of the Negro Leagues, didn’t reach the top level until age 26. But from those points in their respective careers, all they did was mash.

Both men could hit the long ball, but doubles were their specialty. Despite possessing the speed of a cement mixer, Martinez regularly stroked 40 doubles while punching about 25 roundtrippers a year. Wilson owns the third highest career doubles total in Negro Leagues history (as of this writing) but in 300+ fewer plate appearances than anyone above him on the leaderboard. And Wilson could hit the long ball: His 93 known homers are 7th all-time. Both, of course, hit for very high averages while drawing a lot of walks. In addition, both guys were better defensive players than it seemed at first blush, and, had the DH not existed, both would probably have split their careers between third base and first base. They both also lasted as effective hitters deep into their baseball golden years. In fact, the biggest difference between them is speed. Wilson probably had a little bit, and Edgar, thanks to a horrific hamstring injury, had none to speak of. And finally, both are, deservedly, in that Hall in upstate New York.

Next week we’ll start sorting through a new clump of fellows. I’ll give you the hint that there are five or six (still am not sure about one of them). Start your guessing now!