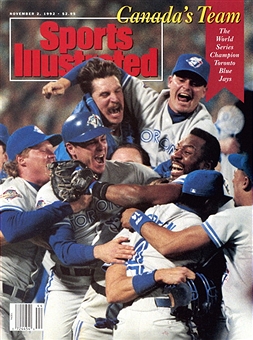 For whatever reason, Dave Stieb and his 57 Blue Jay WAR made four starts for the White Sox in 1993. Roy Halladay had his best years in Philadelphia. Jose Bautista was all over the place before finding a home up north. Tony Fernandez was shipped to the Padres in the McGroff/Alomar/Carter deal, and he played for five teams on top of that. Carlos Delgado was a Marlin and a Met. Jimmy Key was a Yankee and an Oriole. The list keeps going with one guy after another who played for other teams. When I got to Lloyd Moseby and his 25.9 WAR as a Jay, I thought I had my first honoree. Nope. I guess I blocked out his two years in Detroit. Even though Ernie Whitt, #21, had negative combined WAR at his three other stops, those 294 trips to the plate still count. This is not going to be a pretty Rushmore.

Kevin Pillar: Yep, the defensive whiz is the single best player ever to play for the Jays and only the Jays. At 12.1 career WAR, he’s only tied for 24th among Blue Jay offensive players. Yet, he’s the only one not to play elsewhere. Pillar can’t hit, as his -39 career Rbat shows, but his 65 Rfield shows that he’s a great defender. Of course, it’s only a matter of time until he plays for another team. 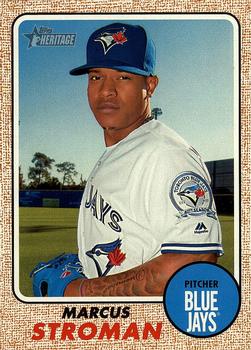 Marcus Stroman: It has taken Stroman just 95 career games to reach 10.9 career WAR and become the best Blue Jay hurler ever not to play for another team. Promising in 2014, injured in 2015, struggling in 2016, it was 2017 during which Stroman became a star. He has plenty of time to move from his tie for 15th among Jay pitchers all-time. If he comes close to repeating, he’ll be in the top-10 after 2018.

Luis Leal: From 1980-1985, Leal was about a league average pitcher, finishing his relatively unknown career with a 51-58 record and 10.8 WAR. For a bit of trivia, he was the starter when Len Barker pitched a perfect game for the Indians in 1981.

Ricky Romero: For a minute there, it seemed like Romero might turn into something. Through three years in the major, he had 42 wins and 11.6 WAR. Things went south at some point in 2012 though. There was no injury. It’s just that his mediocre K rate dipped and his dangerously high BB rate rose. Those events in combination made a baseball career unsustainable. He didn’t pitch again in the majors after 2013 and has just 9.7 WAR to show for his career.

Dave Stieb: With nine Blue Jay WAR on Halladay, Stieb is the best player in Jay history, and it’s not really close. Because he never won more than 18 games in a season and only won 176 in his career, he is an incredibly underrated pitcher. But at his 1982-1985 peak, he was far and away baseball’s best pitcher with 29.4 WAR. The only other hurler in the game within ten WAR of Stieb over those four seasons was Mario Soto at 22.2. And if we expand our range of seasons to 1980-1985, again, Stieb leads all of baseball, and he leads all but Steve Carlton by more than ten WAR. How about we expand some more. From 1979-1990, a period of twelve years, Dave Stieb posted 55.7 WAR. Roger Clemens is next at 46.3. Then Bert Blyleven at 41.3. Not a single other pitcher is within 17 WAR. Last one – since 1974, Stieb is fifth among AL pitchers in WAR.

Jose Bautista: He was nothing before he became a Blue Jay. Then in 2010 he exploded for an MLB-leading 54 homers. He’s hit over 200 more since then and made six straight All-Star teams. Whether it’s the 2015 playoff bat flip or the possibly related punch he took from Rougned Odor, Jose Bautista is who I think of when I think of the 21st century Blue Jays.

Tony Fernandez: Fourth on the Jays all-time WAR list, Fernandez makes the Toronto Rushmore because he put up 37.3 WAR in 1450 games with the Jays but only 7.7 in over 700 games elsewhere. Of course, if he never left Toronto, what’s below would not have happened.

Joe Carter: That’s right. On an analytics-oriented blog, we pay tribute to Joe Carter with a place on the Blue Jay Mount Rushmore. In his seven years in Canada, Carter averaged 29 HR and 105 RBI. He also averaged less than 1.2 WAR. He had a mediocre power bat and an incredibly important lineup spot. That explains the runs batted in. Check out the .308 on base percentage in Toronto and the 104 OPS+ for signs that he really wasn’t a very good player. Oh, but he did hit a home run, one of the most famous in baseball history, to get his face etched on this fake edifice. With the Jays trailing by two runs in the bottom of the ninth inning of the sixth game of the World Series, Mitch Williams walked Rickey Henderson, induced a fly out from Devon White, and gave up a single to Paul Molitor to set the stage for Carter. Tom Cheek called it. “Touch ‘em all, Joe. You’ll never hit a bigger home run in your life.”

Our final Rushmore installment, the Washington Nationals, is next week.