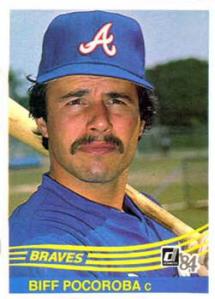 Biff Pocoroba is one of the greatest-named living baseball players. Which is kinda like being one of baseball’s greatest living players. I mean, it’s better than I can claim.

I drafted up a list of my top 25, which you’ll see below. I don’t care much about steroids, so I’m not leaving those fellows out like Verdun2 did, and I took a couple more pitchers as if I were drafting a team that would actually play games. Or play Earl Weaver Baseball games. Beside each name, I’ve included a player’s CHEWS (Chalek’s Equivalent WAR System), which is just like Jay Jaffe’s JAWS, only using my own homebrewed numbers (rounded for easy reading). By the way, CHEWS tends to run a few points lower for pitchers than hitters.

Actually, Verdun2 only listed 24 and left the 25th slot to us, so I took him up on it and chose Blyleven, which got me to ten pitchers. I bet you have a few questions….

I’m of the opinion that I-Rod’s massive defensive difference with Piazza is likely limited to throwing. Every other part of Piazza’s defensive game is well reputed. Given that catcher defense is only represented by throwing and past-ball rates among the uberstats, I’m going with the huge difference in offense and the understanding that today’s d-stats don’t fully appreciate Piazza.

Why only one first baseman?

Like Verdun2, I had to leave off Rod Carew (and Jeff Bagwell). A whole mess of the guys I did choose, however, spent some quality time at first, and it’s the easiest position on the diamond to learn, so, we only need one.

A harder choice was leaving off Ken Griffey, Jr. The logic is somewhat similar here. Bonds, Henderson, and Aaron all played centerfield at times, and all of them, in my opinion, would have been at least average had they been regulars there for long periods of time. Mays never missed a game, so it’s not like my backup center fielder would get used a lot.

OK, but Grich over Griffey?

Well, someone has to back up Joe Morgan, and it turns out that the underloved Grich was microscopically close to Griffey. Also, Grich can probably fake shortstop since he was one in the minors.

And three third basemen over Griffey?

Brett is my backup first baseman, and Boggs is just plain awesome. If Rickey’s hamstring gets twingy, Boggs’ OBP will most definitely play atop the order.

First off, I’m a horrible contrarian who thinks that everyone in the 1960s has this halo around Koufax that a close examination of the facts don’t quite add up to. He’s not the best living pitcher or anything close to it. He’s something like the Rube Waddell of his time. Or Bob Feller with fewer merely average or decent seasons. See, those six years he had before he moved to Dodger Stadium and became KOUFAX are really crappy, plus he’s one of the worst hitting pitchers you’ll find. So while those ERAs and no-nos in the 1960s are insane, in the contexts of that era and that ballpark and including everything he did, his performance is merely awesome rather than transcendent as the mythmakers claim. After all, I voted for the guy for the Hall of Miller and Eric. But once I adjust for things such as historical usage patterns and batting, I have Koufax with three legitimately great seasons of 9.9, 8.8, and 7.5 WAR, plus two other years at 6.6 WAR and 5.1 WAR. In fact, let me line him up with some of the contemporaries I listed above (plus Blyeleven). Here are all seasons of 5.0 or higher (All-Star-level years), per my personally tailored WAR:

If you question my way of calculating it, that’s fine, my version reflects my own biases and beliefs. In which case, I’d ask you to look at WAR in whatever way you prefer and see if the point holds. If you question the validity of WAR, that’s fine too, but we can shoot holes in any approach, and WAR is the most rigorous. I mean, you don’t think I’m going to give much credence to wins, winning percentage, and ERA alone do you?

What about relief pitchers?

Which of the ten pitchers I chose do you think would be a worse relief pitcher than Mariano Rivera? If you believe that, I have a question for you: Really?

ESPN dove into this Greatest Living Players idea with its Franchise Four series a few months ago. As David Schoenfield wrote, “That’s it. Greatest. Not most iconic. Not best role models. The best players.”

This requires a bit more sifting than our last question, what with players moving around more than they did back in the day. But let’s have a crack at it. The simplest way to get toward an answer for this question was to look at who had the most WAA (wins above average) for each team. If a guy doesn’t spend an entire career with a single team anymore, I’d rather know how much impact his performance had, and WAA does that better than WAR (which includes a lot of value for showing up and not being awful).

ANGELS: Mike Trout
Runner up: Chuck Finley
Is there any doubt about Mike Trout?

ASTROS: Jeff Bagwell
Runner up: Craig Biggio
Bzzzzzzzzzzzz! Roy Oswalt and Nolan Ryan have some standing here, but not enough.

ATHLETICS: Rickey Henderson
Runner up:  Reggie Jackson
Sal Bando could have been our runner up, he generated a little more value than Reggie but in 500 more plate appearances. I don’t blame you for going with Bando instead.

BRAVES: Hank Aaron
Runner up:  Greg Maddux
The question is not Hank versus Maddux but Chipper versus Maddux for the runner up. It could go either way. Jones spent more time with the Braves, Maddux was all-time awesome with them. I’ll lean to the awesome here.

BLUE JAYS: Dave Stieb
Runner up: Roy Halladay
The Jays haven’t produced many great, long-time hitters, and others like Paul Molitor and Robbie Alomar haven’t stuck around all that long. Stieb was, with the exception of 22 innings, a lifetime Jay. Halladay’s pretty awesome, though.

CARDINALS: Albert Pujols
Runner up:  Bob Gibson
Pujols was so good for the Cards that he’s better than Bob Gibson. Think on that a while.

CUBS: Ryne Sandberg
Runner up:  Sammy Sosa
Another easy one at the top, and a toughie after. Fergie Jenkins has a solid case too.

DIAMONDBACKS: Randy Johnson
Runner up: Curt Schilling
Our runner up probably should be Brandon Webb, but I’m going with Schilling thanks to his importance to the D’Backs 2001 World Series run. By the end of this year, it’s possible Paul Goldschmidt is the runner up.

DODGERS: Duke Snider
Runner up: Sandy Koufax
Clayton Kershaw will probably pass Koufax by the end of this or next year. Pee Wee Reese might also be a fair choice at runner up. He’s got more overall value, if less peak value, and he played a vital role in the acceptance of Jackie Robinson, which allowed the Dodgers to start ripping off a decade of winning.

INDIANS: Jim Thome
Runner up: Kenny Lofton
Their competition? Sudden Sam McDowell. Go look up how awesome he was. Too bad he was a drinking man.

MARINERS: Ken Griffey, Jr.
Runner up: Edgar Martinez
King Felix is working on it, though.

MARLINS: Giancarlo Stanton
Runner up: ???
Stanton’s the easy one, but for runner up, it’s kind of a hodge podge of who cares. Josh Johnson? Two years of Kevin Brown? Hanley Ramirez? Maybe Edgar Renteria for his World Series winning single?

PADRES: Trevor Hoffman
Runner up: Dave Winfield
Hoffman because he was there so long and “Hell’s Bells” and all that. Yeah, even I got sentimental sometimes. But really, it’s him, Winfield, or Jake Peavy. Winfield for his part is pretty much the Padres’ best living hitter by dint of being in the top three to five in everything important. This despite playing only eight years in San Diego.

PHILLIES: Mike Schmidt
Runner up: Steve Carlton
Chase Utley is in the mix for runner up as well.

PIRATES: Barry Bonds
Runner up: Andrew McCutchen
Eight of the Pirates ten best players ever are all dead with Bonds and McCutchen the holdouts. Cutch probably never claims the top spot from Barry. He’s about 33% behind Bonds in WAA in the same number of PAs.

RANGERS: Ivan Rodriguez
Runner up: Buddy Bell
Buddy Bell really gets no respect. Raffy Palmeiro is in the running too.

RAYS: Evan Longoria
Runner up: Ben Zobrist
Longo will dominate this list corner of the baseball world for years to come.

RED SOX: Roger Clemens
Runner up: Carl Yastrzemski
Yaz and Wade Boggs produced the same Wins Above Average, at least according to BBREF, but with Boggs doing so in half the time. I’d usually take Boggs, therefore. However, I dig DRA over at Seamheads’s Baseball Gauge, and it, adjusted for the Monster per creator Michael Humphreys’ suggestion, springboards Yaz over Boggs. DRA also doesn’t much like Boggs while BBREF’s rfield does.

REDS: Johnny Bench
Runner up: Joe Morgan
There’s a great argument to selecting Morgan over Bench here, but I’ll go with the best catcher ever.

ROCKIES: Larry Walker
Runner up: Todd Helton
Walker posted the same Wins Above Average in about half the time Helton did. Does anyone think Tulo will be around Colorado long enough to get close to Helton? Or be able to stay in the lineup enough?

TIGERS: Al Kaline
Runner up: Lou Whitaker and Alan Trammell
Mr. Tiger, of course. I’m taking a Solomonesque approach to Whitaker and Trammell who are so close together that it would bring Bengalites needless pain to separate them.

TWINS: Rod Carew
Runner up: Bert Blyleven
Or Killebrew, but his DRA knocks him down just enough.

WHITE SOX: Frank Thomas
Runner up:  Mark Buehrle
It was Buehrle or Billy Pierce in my eyes. I’ll go with the guy who threw the perfecto as a tiebreaker.

YANKEES: Yogi Berra
Runner up: Alex Rodriguez
You could look it up. Mo would be a reasonable runner up, too, but it’s more fun to stick it in the eyes of long-insufferable Yankees fans. Of course no Yankee fan would ever admit that Rodriguez is a true Yankee. Or that Jeter’s defense is so very bad that it could bounce him out of the top two spots among living pinstripers.

So I saved the best for last. What about you? What’s your 25-man roster of living greats look like? Or for your favorite team? Pop ’em in the comments, please!